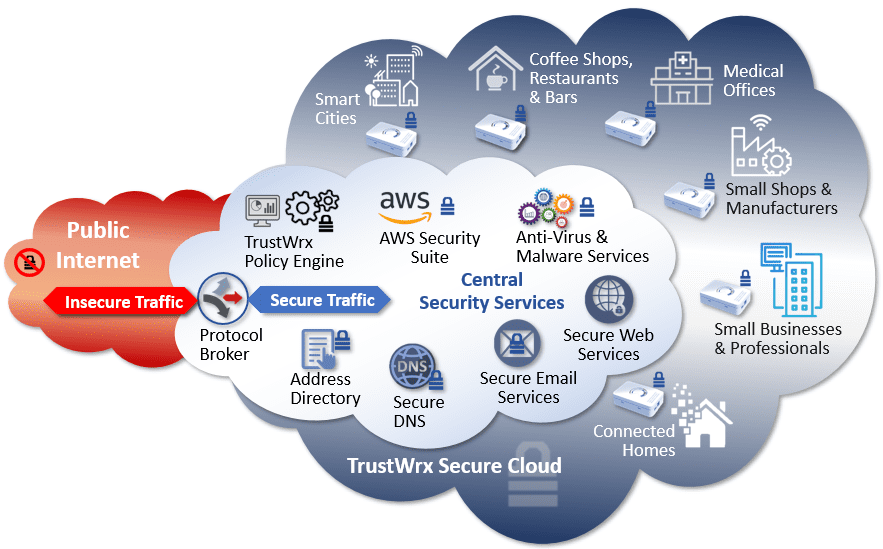 The TrustWrx Secure Cloud brings to the small network a degree of security that has been available previously only to the largest networks. The corporate equivalent to TrustWrx is the enterprise SD-WAN – requiring VPNs, edge appliances and central security services, but also requiring highly complex installation efforts, costs and maintenance overhead.  By providing a communications technology that is far more secure than a VPN, along with professionally managed central security services, TrustWrx brings to the small network a level of cost-effective and hassle-free security that exceeds that of most major corporate networks.

The TrustWrx Secure Cloud is comprised of three main parts:

The TrustWrx Secure Cloud is an isolated and secure
communications envelope within which:

Purchased online or at retail outlets, the secure gateway from TrustWrx is the consumer end of the Secure Cloud. It is an inexpensive security-hardened Linux computer onto which the patented TrustWrx client software has been pre-installed. Simply plugged in at the on-premise router or critical endpoint, the gateway maintains a triply-encrypted connection with the remote central security services.  It renders all computers and devices behind it visible only to the central security services and invisible to all other eyes on the open Internet. This means that no one on the Internet can see, access or tamper with any traffic in transit within the TrustWrx Secure Cloud or any digital equipment behind the customer’s secure gateway.

The TrustWrx Central Security Services is a cloud-based combination of Amazon Web Services (AWS) security services (developed by AWS under a $600 million contract with the CIA) along with highly sophisticated email and web security components.  Managed by full-time security professionals and kept up-to-the-minute with the latest protections, TrustWrx seamlessly analyzes all traffic heading towards your network. This allows us to trap and quarantine many of the malicious emails, web exploits and direct attacks that might otherwise get past your desktop anti-malware software.

The central policy engine is a secure database application layer that is professionally managed on central cloud services. It maintains all policies for devices, identities, addresses, accounts, etc.  It is the base reference for packet source authentication and control of all packet traffic.

The policy engine provides authentication at the inbound port of registered source IP addresses, source machine fingerprints and other security metrics for all TrustWrx packet traffic. These security fields are maintained at the central policy engine and local caches, are embedded within all encrypted packet headers, moving with the packets and validating all packets at all encountered ports.

Patented Core Technology – US patents protect many features of the TrustWrx technology.

The TrustWrx technology has been vetted by major testing labs for security and operational vulnerabilities.

A Performance and Stress test at NSS Labs proved that one thousand clients could send and receive over six Terabits of 1 MB messages per 8 hour day through two minimal rack servers – resulting in an NSS Labs high-performance carrier-class certification.

Whitepapers Available Upon Request
Why is your anti-virus no longer good enough?

The primary short-coming of desktop anti-virus and malware software is that the invader is already on the computer before the protective software intervenes.

Many modern exploits get to work before the defensive mechanisms come into play.  The only way to overcome this problem is to deal with it upstream, remotely at central servers before it gets anywhere near your network.

This is how major corporate networks protect their users at levels that the home or business network has been denied, until now.

The other major problem is the increasing onslaught of direct attacks that don’t arrive cloaked in an email or web session.

These attacks come at the computer directly, attempting to find open ports where they can invade with the least resistance. They are the most difficult to detect and are best shut down by denying them access to ports so they cannot even get in.

TrustWrx accomplishes this through its patented communications technology that allows only TrustWrx conditioned packets to access ports, and turning a blind eye to all packets that are from unknown sources.